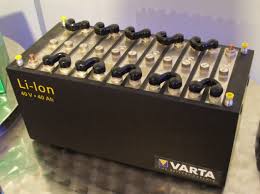 With energy conservation becoming more and more of a common interest across the globe, solar energy has grown increasing popular. It is not uncommon to see homes with huge solar panels on the roof. These panels are capable of converting energy from the sun into an electrical current. This renewable source of energy not only helps to reduce the cost of in-home energy, but it also helps families reduce their carbon footprint – their contribution to the level of pollutants that lead to global warming and other environmental hazards.

One of the major challenges to solar power is that it needs direct contact with sun light. This means that on cloudy days and at night, the solar panels can’t produce electricity. According to CNN Money, a number of companies, including Tesla, BYD and Bosh have developed a new lithium ion battery storage system that is capable of storing energy that is generated by solar panels during the day. This energy can be used during off peak hours and cloudy days.

Not Just For Powering Cars

These new energy storage systems are similar to the ones that are used in electric cars. They are extremely powerful and highly efficient. This will allow homeowners who use solar power to install a huge lithium ion battery in their home to store energy for a rainy day.

Outside of providing the capacity to capitalize on solar energy during off peak hours, this new technology will also supply has much as 2 days of power when there are power outages – serving as a virtual generator. These systems allow you to control when you use your conventional electricity and when you use solar stored power – meaning you can create a hybrid energy system in your home that will vastly improve energy efficiency and reduce the overall costs. One way that this could work is to use your solar energy during peak utility hours. This has the potential of saving several hundred to several thousand dollars per year in conventional energy costs.

Uses In The Grid

These batteries will also help your power company integrate renewable energy into your power grid. Because solar power is produced intermittently – surging in and out – it can create instability. Having an energy storage system will allow the energy levels to be stabilized.

One of the initial drawbacks to these new storage systems is price. As with most new technology, these systems can be quite expensive on the front-end. BYD – a Chinese company partly owned by Berkshire Hathaway – offers battery storage systems that range from $3,000 to $10,000 – depending on size. This should not discourage you too much because as subsidies are created for these new systems, you will see the cost drop drastically. You can find out more about subsidies that apply to your area by checking out websites similar to Infinite Energy.

Even when the pricing issue is considered, industry experts are still projecting a bright future for solar powered storage. As with the natural trend of technological advances, as the technology improves, the cost to manufacture these systems will decrease – creating a drop in overall costs. There are predictions that the cost of these energy systems could fall as much as 57 percent by 2020. The high demand in countries such as Japan and Germany are slowly driving down the cost in the other countries. These projections are predict annual revenue for these systems will increase from $200 million currently to $2.8 billion in 2018.

There are obviously some growing pains that will be experienced with this new technology, but the stage has been set for those homeowners who desire to liberate themselves from the use of conventional power.

William Dawson studies energy opportunities. He enjoys blogging about energy technology and options for the future.